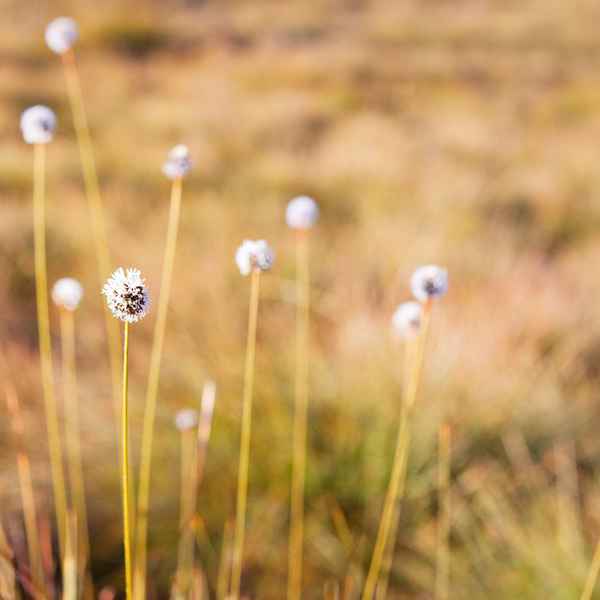 The beauty of buttongrass

When we’re walking the Overland Track, the amount of different ecosystems we pass through is stunning. It’s one of the main reasons that the Track makes every list of the best multi-day walks in the world.

Everyone has their own favourite type of landscape – the exposed mountaintops, the eucalypt woodlands, the temperate rainforests. For me, the button-grass moorlands are the most interesting and exciting of all of them.

Perhaps on the surface they aren’t the sexiest places. Button-grass (Gymnoschoenus sphaerocephalus is its poetic Latin name) is a bronzy-coloured sedge that grows in tussocks on some of the poorest soils on the island. Much of it is on peat – and Tasmania has the largest peatlands in the southern hemisphere. More than a million hectares in Tasmania are covered with button-grass moorlands. There are few trees, and few features for the eye to settle on. But look closely, and you’ll find these shimmering seas of sedge not only picturesque, but fascinating.

But these plains of button-grass can tell us a lot about the history of an area, especially as it relates to fire. Like eucalypts – but unlike rainforest species – button-grass is adapted to the regular influence of fire. They love it. When a fire comes through, button-grass will be one of the first species to colonise the scorched earth.

Aboriginal people have been familiar with this fact for a long time; they used firing techniques to promote fresh new growth and thus create marsupial-populous hunting grounds.

Plenty of critters have come to make these moorlands their home. These include the elusive ground parrots (I’ve seen them a handful of times amongst the button-grass on Day 2 of the Track), and the peculiar burrowing crayfish, who play a crucial role in aerating the poor soils. Swift-moving predators like the quoll and the antechinus also frequent this terrain, as do other native rodents such as the broad-toothed mouse and the swamp rat. There is constant movement along the track between the tussocks, as dragonflies, grasshoppers and skinks dart and dive about. And the moorlands are often pulsing with the sound of frogs’ calls.

At different times of the year, too, the moor is made beautiful by flowering plants – including the delicate, bright purple petal of fairy’s apron (Utricularia dichotoma), and the insectivorous alpine sundew (Drosera arcturi), as well as the numerous flowering heath species. The button-grass itself puts out a flower during the summer: a beautiful head of little white petals appears at the end of a long stem.

Some of my favourite memories from walking in the National Park have occurred on button-grass plains. It’s a landscape that rewards a slow passage, close attention, and a sense of curiosity.